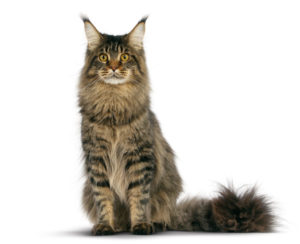 Reputed for its intelligence and playful, gentle personality, the Maine Coon is a very large and sociable cat, hence its nickname, “the gentle giant.” It is characterized by a prominent ruff along its chest, robust bone structure, triangular body shape and a long, bushy tail.

Maine Coons are big boned and muscular, with males weighing up to 18 pounds. They’re also known as the American Longhair.

The Maine Coon is thought to be the result of breeding between domestic shorthair cats and longhair cats that hitched a ride to America on European settlers’ ships.

Only the strongest and fittest could survive the harsh New England winters, and to this day Maine Coons are known as hearty working cats with excellent hunting skills.