Our Rescue Pet of the Year winners 2017 have been announced and we are pleased to announce that the winners are:

Both Darwin and Scout won by attracting a whopping majority of the votes!

We would like to thank everybody that entered a pet into our 2017 competition, our runners up and the public for voting. 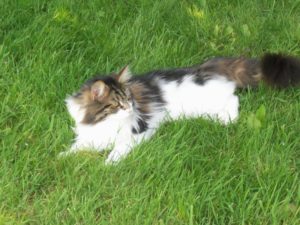 We run a cat sanctuary for elderly, disabled & special needs cats where we give them their forever home. We adopted Darwin, when he was a kitten, from an elderly couple who could not take care of him. Being a Maine Coon he is nurturing and an excellent ‘sibling’ to all 17 of our rescue cats. Heartbreakingly, in April this year, Darwin was shot in the face with a shotgun whilst out in the fields one night and suffered extensive facial damage. The lead shot blew a hole in the roof of his mouth up into his face and shattered his upper jaw and gum to a point where he has none left on the upper left side. Over 12 weeks of recovery he had several operations and almost lost his life twice. He fought so hard, our vets fought so hard and exactly 12 weeks to the day Darwin was fully healed. It is amazing considering all he went through that he not only survived but that he healed so well, so quickly. Darwin now has a little ‘Elvis’ lip and dribbles at times but apart from that he looks as magnificent as ever. We do have the photos and x-rays that show the lead shot inside his face and his progress. He gained worldwide support through social media and his story is on Instagram as #toughestcatintheworld and #fightfordarwin 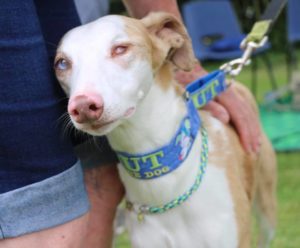 Scout was picked up as a stray on the streets of County Durham when he was just a puppy and was taken to a stray pound. Initial thoughts were that Scout was blind and deaf, he was suffering from mange and had contracted kennel cough.

Because of his many issues it was felt that euthanasia might be the kindest thing for him, after all, who would want a puppy with so many problems? Due the combined efforts of three amazing rescue organisations who decided that Scout needed a chance, his life was saved and he was transported to safety. We adopted Scout when he was about six months of age and he turned our world upside down.

Although not deaf, Scout is almost completely blind but he doesn’t let this hold him back one bit. We have promised Scout that he will be allowed to live as normal a life as possible and this is exactly what he does. Scout has climbed mountains and has paddled in the sea, he has achieved his Bronze Good Citizens award and has even tried his paw at agility.

Scout is now a fundraiser for one of the charities who helped to save his life and also helps to educate people on how life enriching owning a dog with a disability can be. Scout is also a Pets As Therapy dog, a role which he absolutely loves. Scout brings the sunshine into every single day and never fails to melt hearts wherever he goes.

At ROYAL CANIN® we work in partnership with Rescue Centres who want to share, promote and educate the benefits of tailored nutrition to the owners of their rehomed cats and dogs. If you would like to find out more about our Rescue Partnership, or are a Rescue Centre that would like to become a member, please get in touch with us by calling 0845 300 5965 (UK) or 1890 882 356 (Ireland) for more information.